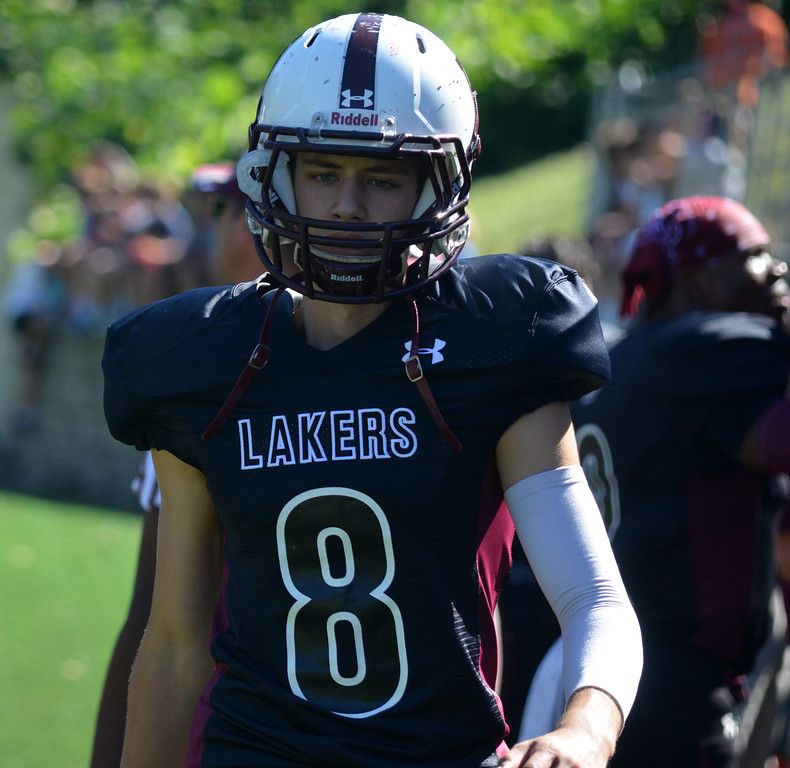 Dom Maggio was the first name that came to mind when it came time to select an elite athlete from the Baltimore Metro Area over the last 10 years with a talent for launching pigskins from his foot.

He excelled in all aspects of the specialty — kickoffs, punts and field goals — as a four-year starter at the Boys’ Latin School of Maryland.


After his high school career at Boys’ Latin, Dom Maggio developed into one of the best college punters in the nation at Wake Forest and remains an NFL prospect.

By the time Maggio was a rising senior for the Lakers, his 43.5-yards-per-punt average was enough to earn a spot on the roster of the 2016 Under Armour All-American Football Game at Tropicana Field in St. Petersburg, Fla. that was televised nationally on ESPN2.

Maggio graded out as the top punter at Jamie Kohl’s kicking camp that summer in Milwaukee with 400 other kickers attending the event.

“Jamie Kohl has been my guy,” Maggio told VSN in 2015. “I have been working with him for the last four years. He works with dozens of NFL and college kickers and it is always great to go there because you can practice with and learn from those guys.”

He ultimately committed to Wake Forest University in July of 2014 after receiving strong interest from the universities of Maryland, Connecticut, Florida, Nebraska, Pennsylvania and Virginia, among others.

His other attributes heading into his final season at BL included a penchant for pinning opposing offenses inside their own 20 with great regularity on his punts and converting 12-of-15 field goal attempts, just one shy of the state record for a season.

Moreover, Maggio was 29-of-30 on point-after attempts.

His senior year wasn’t too shabby, either, beginning in early September when he accounted for all of BL’s points with two field goals in a 28-6 setback to Loyola Blakefield of the Maryland Interscholastic Athletic Association A Conference.

Maggio was also 4-for-4 on extra-point kicks and he averaged 48 yards-per-punt on four attempts in the contest in which all of his kickoffs went for touchbacks.

He ended up the season averaging 45.1 yards per punt attempt and was also 11-for-16 on field goal attempts, including a 55-yarder in a 21-17 loss to eventual B Conference champ John Carroll School.

In addition, Maggio was perfect on extra points and forced touchbacks on 34-of-39 kickoffs.

His journey as an elite kicker began by playing competitive football for the Hereford Bulls rec. team as a 10-year-old who rocketed a 30-yard field goal through the uprights.

“I think that turned some heads,” Maggio understated about the kick at Seminary Park in Lutherville.

While he participated in other sports growing up and at Boys’ Latin, he became focused on kicking as a high school freshman.

Even so, BL coach Ritchie Schell recognized that the Wake Forest signee was more than a prodigious kicker.

“Dom is just a great athlete — a three-sport athlete,” Schell said. “He was good enough to be a starting quarterback. He has great form. He could throw, he could catch. He also pitched for the baseball team. He’s just a fabulous athlete. But we only used him as a kicker, because he was going to kick in college. He punted us out of so many tough situations. We hardly practiced kickoff (defense) because he almost always got a touchback. He’s definitely legit.”

Following his career at BL, Maggio concentrated on punting in another wildly successful career for the Demon Deacons after being offered an athletic scholarship in 2014.

He hit the ground running in Winston-Salem, finishing with the third-highest punting average (42.0) in school history by a freshman while posting a 46.8 yard-per-punt average against North Carolina State University and booming a career-long 80-yard punt against Clemson University that was the longest punt by an Atlantic Coast Conference kicker in 2016.

As a sophomore, he upped his average to 44.1 for the season and unleashed a 74-yarder against Duke University during a game in which his average punt sailed 52 yards.

While his average punt numbers dipped slightly to 41.8 as a junior, Maggio improved his finesse by dumping 11 punts inside the opponents’ 10-yard line.

The Second Team All-ACC selectee finished his final season second in the conference with a 46.8 mark, dunked 30 punts inside the 20 and led the league with a whopping 30 punts of 50 yards or more.

He set program standards with 80 punts of 50 or more yards and 40 games with a 40-yard-plus average and eclipsed 10,000-yards for his career.

While Maggio said that cogent punting stats, such as gross and net average, the number of time punts deep in enemy territory and punts over 50 yards, are all important, he mentioned one other attribute — hang time — that helps a punter help his team.

“Hang time allows your team the time to get down and cover the punt,” Maggio said. “It’s really important. You just try to hit the ball the best way that will help your team. But really, it’s a combination of all those things (that make a good punter).”

He was signed as an undrafted free agent by the Baltimore Ravens, but when the NFL abandoned its preseason schedule because of COVID-19, Maggio had no opportunity to showcase his talents.

“He will be in the NFL next year, trust me,” Schell predicted.

To that end, Maggio said that he continues to prepare for a professional football career as if he was still playing.

“I’m in full football mode now, for sure,” he said. “I’m lifting weights and training hard. I’m staying busy and hoping for another call.”
Back